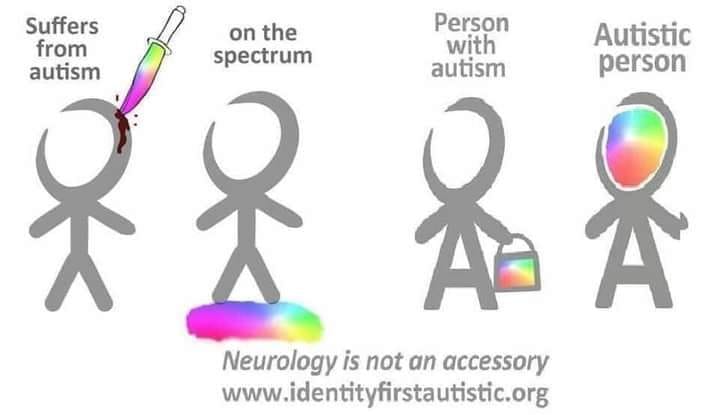 Like many of my colleagues who were psychology students in undergrad, it was permanently etched in my brain that we must use person-first language (e.g., an individual with schizophrenia, etc.) rather than labeling someone with a diagnosis (e.g., the schizophrenic person).  As such, it has taken me longer than it should to embrace the movement of identity-first identification and the related movement of autistic individuals preferring to be called “autistic” rather than being called an individual with autism.  I owe it to the community to embrace this terminology, and surrender my old ways!

As the image from www.IdentityFirstAutistic.org suggests, neurology is not an accessory, rather, it represents the essence of who people are.  Those who are able to express themselves have spoken loudly and clearly and have indicated that autism makes them who they are. It is a source of pride and rather than citing it as more of a disability, it is simply one component in the neurodiverse world in which we all live!